Real. Comforting. Food.
October 12, 2011
11 Comments »
Being too cheap to invest in the wonders of cable, has really put my cooking show and Food Network addiction to a screeching halt. Due to this personal injustice that I have inflicted on myself, I have missed years, YEARS, of fabulous programming from cooks like Pioneer Woman,who throws culinary caution to the wind and cooks from the heart , Paula Deen who adds an extra stick of butter to any and every dish just in case, and last but not least Alton Brown who mixes the wonders of science and geekdom with the glories of food.
Seeing as I’ve missed out on so much, when my bestie presented me with the opportunity to meet One of the Greats, I had to join in. Who would I be to leave her hanging? With there being no cake classes to hold that night and the promise of caffeine and coffee the next day, I had to partake.  If the roles were reversed she would sit through a PW book signing with me, I had to submit and do this one for her. Needless to say…
Holy crap am I glad I did! 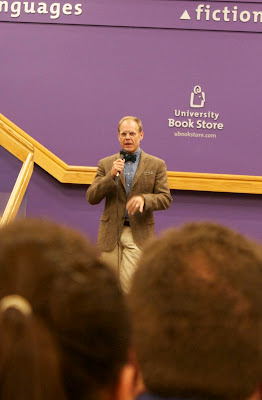 Not only is sir Alton geeky on TV, but he did not disappoint in person. Bow tie and all! For nearly an hour he took audience questions, ranging from “Who is your favorite Iron Chef?” asked by an adorable little toe-head to “Why Welch’s?” All valid questions.
You name it, it was probably asked. The answers to these questions included, “I’m not dumb enough to answer That question…all the Iron Chefs are snowflakes. They have knives, I’m not answering”, and “Worst dish? Raw Trout Ice Cream!”
And as for why the Welch’s pitches, “It goes great with gin.”
Straight shooter, I like that.
After all of the questions were answered and Beka was bouncing on the edge of her seat, the book signing began. We continued to sit for about an hour and a half, butt bones aching and growing fidget-tier by the minute. The snaking line wrapped almost entirely around the downstairs section of the bookstore.
As the winding line grew shorter, us two weary book-signing travelers meandered up the stairs into the dwindling line. 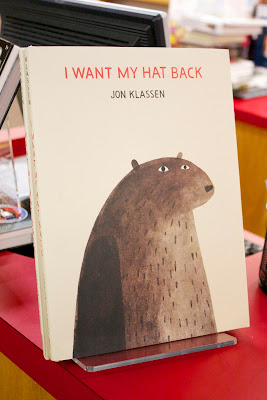 Through the Children’s section we wound, stumbling upon this beauty.
Bawr! A beer wanting his hat back? What jerk would do such a thing? He looks so cute and cuddly, he needs some love. And a hat! 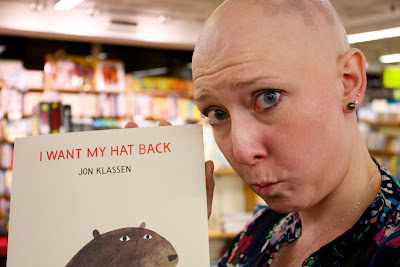 Next on our kids book stroll we came across “Bake Sale”.  Is it weird that cupcakes selling cupcakes is part of childrens’ reading fodder? It’s like cupcake cannibalism… 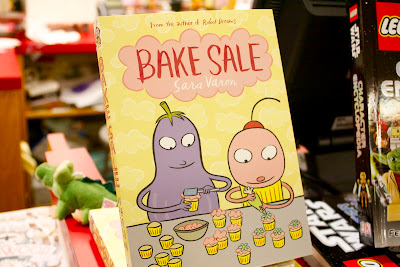 Finally, we were within eyesight of said Great One. Just as Beka was about to piddle like a puppy, we were up!
(Subconscious says, Piddle? Really Megan, you just jumped ahead 25 years to become your mother…) 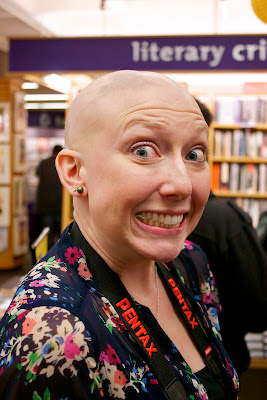 He was so patient with the two of us fumbling with our things, asking us polite questions and even cracking a few funnies. Then…
I presented him with a treat – scones and a jar of my Blackberry Grand Marnier Jam.
The picture below was taken by the camera guy as I told him…I rendered The Great One, speechless. Almost. 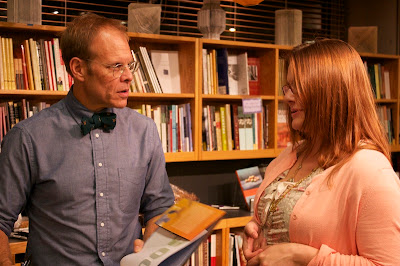 He imparted a thankful “Bless you!” And gave me a kiss on the cheek. Well, hair mostly – but I felt it on my cheek!! So, we’re sticking with – Alton Brown kissed me on the cheek!
Said cheek has a claim to fame.
He humored us both with a couple more pictures, and we were done. Our momentary brushes with greatness on a rainy Seattle Monday night.
It was indeed a glorious day for us both.
*Update: Beka is claiming a Giddy Hangover – her week got made* 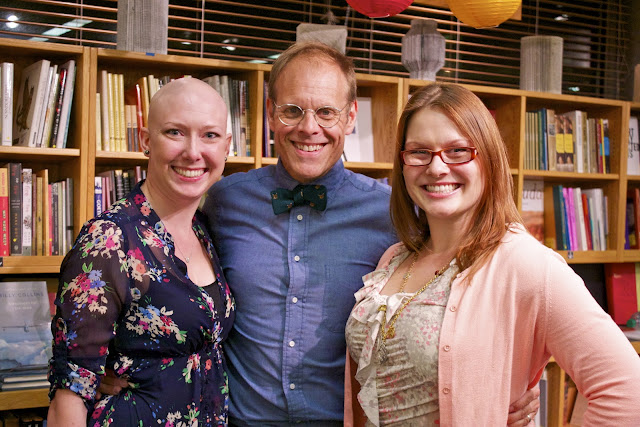