Real. Comforting. Food.
October 26, 2011
6 Comments »
A couple of weeks ago, on a quest to meet the Great One, Alton Brown, with Beka he graciously and hilariously answered the plethora of questions the captured audience threw his way. One of the questions that was posed was, “What advice do you have for an aspiring cook?”. His answer was to learn to cook an egg. There were some scoffs and grumbles amongst the troops, but in all seriousness he told us all that learning to cook an egg is a pivotal turn in your culinary experience. It can go from fantastic to faulty in a split second and it teaches you a wide range of lessons, like patience – something that I am notoriously lacking. 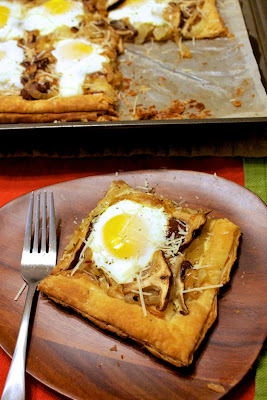 (Please excuse the atrocious picture – it was taken at 8 at night –
it’s SO much tastier than it looks! I’ll be making it again later this week and including better pictures)
I’ve covered some of the secrets to making the perfect poached egg, including using vinegar in the water bath to keep the whites together and lookin’ purdy. Baking in egg is something totally different. And I found this out making this tart.
Last week my new copy of Martha’s Everyday Food came in the mail and as I ravenously turned the pages to discover sheer glory and gather ideas, the Shitake and Egg Tart caught my eye. Ben is someone who has at one point in his life come to hate eggs (and gravy, but that’s a rant for another time.). The last three plus years I’ve been making steady calculated maneuvers to incorporate eggs into his diet.
The egg and mushroom tart in the magazine sent me drooling like Huck over a scooby-snack. How could I pass up buttery and gooey eggs over puff pastry and sauteed mushrooms? I couldn’t.
For this recipe I did make a couple of minor substitutions, but I think they were for the better. I will leave it entirely up to you.
For your Grocery List be sure to include:
~ 1 sheet Puff Pastry
~ 3/4 pound Mushrooms, thinly sliced
(I used Chantrelle, the recipe called for Shitake)
~ 2 Tbsp Butter
~ 1 medium Onion, thinly sliced
~ 1/4 cup Parmesan Cheese, shredded
~ 2 1/2 tsp Tarragon, minced
First, roll out the puff pastry into a 11×14 square, 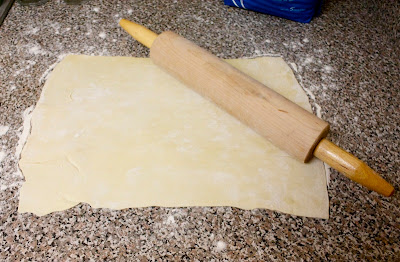 trimming the edges to create a perfect rectangle. 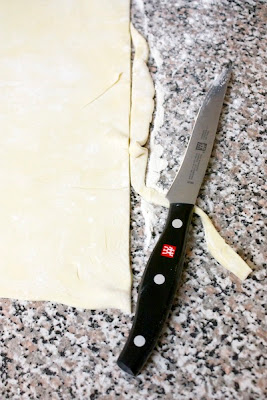 I layered my pan with a couple of parchment triangles and went to work. 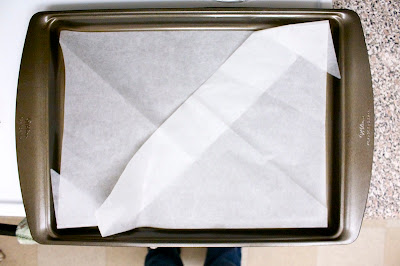 Like a pie crust, I rolled the puff pastry over my rolling pin and laid it out over the parchment. 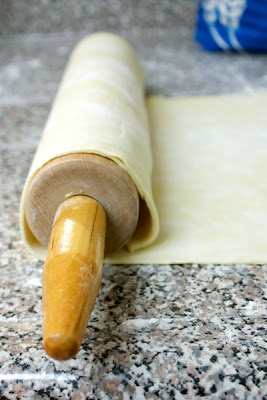 Once it was all situated, as per Martha’s directions the pastry was scored about 1/2-3/4 of an inch around all of the edges and docked with the tines of a fork to prevent it from puffing too badly when I par-bake it.
From here, the dough was put into the fridge for 20 minutes to chill and the oven was heated to 375 degrees. 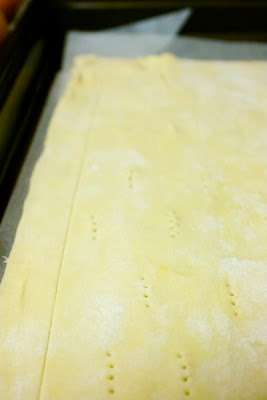 While the dough was chilling and the oven was heating, I went about prepping the rest of the goods. 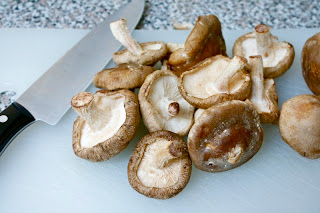 The mushrooms were washed, ends trimmed and then all sliced thinly. Same goes with the onion. Now I used a sweet onion, but feel free to use a plain ol’ yellow or heck, a red might be kind fun too.
Into a 12″ non-stick skillet, 2 tablespoons of butter were melted and the onions thrown in to carmelize. Once they were golden and delicious, the mushrooms were added and tossed around until they began to wilt slightly. 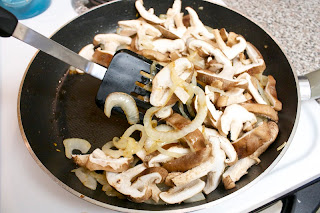 About now is when the 20 minutes was up for the dough to chill, so it was promptly put into the oven for 15 minutes and left to puff up slightly and turn golden brown.
Once partially baked it was taken out of the oven and topped with all of the glory that caramelized onions and chantrelles can provide. Now here comes the most fun part of all!
I made 6 little “wells” into the toppings that would nestle each egg. Evenly spacing the wells apart, I cracked six eggs and placed one into each well. Then the whole pan was placed back into the oven for ten minutes so the eggs would set.
Unfortunately, my nerves got the best of me and I overcooked the eggs! AHHH!!
Either way it was still utterly delicious once topped with some dried tarragon.
One thing I would do differently next time is to add some pork sausage to it. It may not be bacon, but it’s equally as tasty. Mmmm pork, the wonder animal.
Is there anything it can’t do? *name that TV show*
This may be a teensy bit labor intensive for what you get out of it, but it is worth every morsel.
If you’d like the actual recipe go pick up a copy of Martha’s newest Everyday Food magazine.

6 comments on “Chantrelle and Egg Tart”