Who doesn’t love brunch? And who doesn’t love foods in miniature? I don’t know about you, but I love them both – so when there was an opportunity to incorporate both of these elements into one, I was IN!

And how would I do this? With a quiche. Quiche is one of those foods so delicate and elegant it fits in perfectly amongst it’s brunchy counterparts, and can class up any ordinary breakfast spread you lay out.

America’s Test Kitchen has been hosting a bi-weekly fresh food challenge, with this week’s ingredient being tomatoes, I knew I couldn’t stop at a basic ol’ quiche. It had to be stepped up a notch.

Tomatoes present a few unique challenges when incorporating them into baked goods. With their watery insides they could take a quiche’s delicate crust from flaky to flaccid in no time flat. They could also water down the egg, leaving you not with a creamy custard but a opaque soup. Either way, it’s not good. 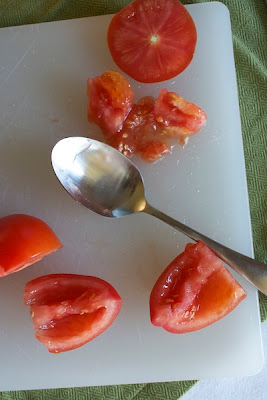 To counteract the potential disastrous results, wicking the tomatoes of their moisture was key. I elected to quarter my tomatoes, removing the the inner pith and seeds with a spoon. After discarding these pieces, the meat was chopped, placed in a colander over a medium bowl and tossed with about a tablespoons worth of salt. This would help expedite the wicking process and leave us with all of the yumminess of a  fleshy tomato, and not the soggy slime. 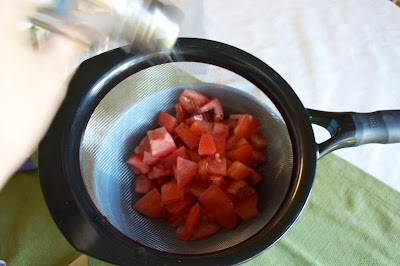 For the three tomatoes that I cubed up, I sprinkled about 1 Tablespoon of salt on top.
If you feel it’s not enough, add more. All that matters is getting the moisture outta there. 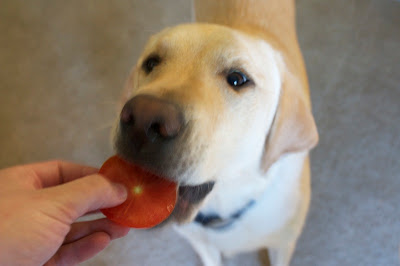 And if you have any extra tomato layin’ around, hand it over to your favorite labrador.
Now that they are tossed in salt, place them in the fridge to do their business.
Moving on…
For the cups themselves, I sought out Ree Drummond’s Perfect Pie Crust recipe. During my lifetime I have never been what you’d call a pie-crust making aficionado. They are not my bag. I’ve always been more of a “buy the premade rolled up Pilsbury” version and take credit for all the hard work they did whenever I get complimented on “my” pie crusts. Until now I didn’t have the heart to break it to people that me and pie crusts don’t get along…
Until today.
This was my first ever perfect pie crust. Ree, you did not undersell the perfection of this crust.
Since I only needed to make 12 quiche cups, I took the other half of this pie crust that was made, tossed it into a bag and threw it in the freezer for later. 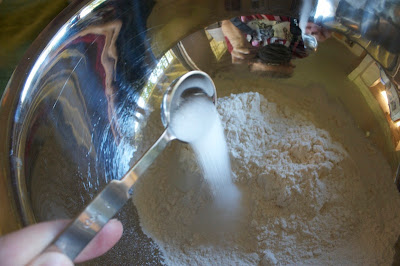 To begin at the beginning I whisked together the necessary 3 cups of All Purpose flour with 1 teaspoon salt. 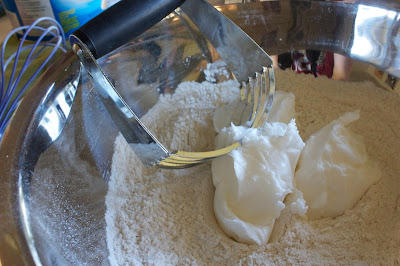 Next, 1 1/2 cups of shortening was blended into the flour mixture until it resembled small pea sized crumbles. 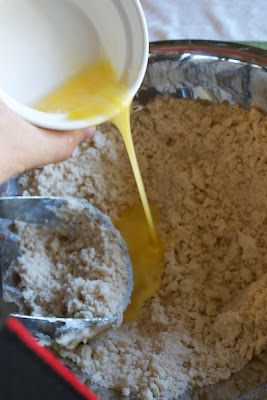 A lightly beaten egg was mixed in, along with 5 tablespoons of cold water and 1 of white vinegar. Now we’re cookin’! 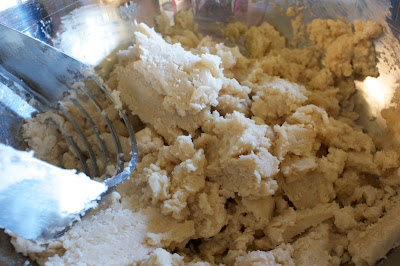 This is a good looking pie crust. As I wiped my brow of previously held nervousness and panic,  I separated the whole mound into two halves, using one in this recipe and freezing the other.
On a floured surface, I took a rolling pin to the dough until it was 1/3″ thick. It takes a round about 4 1/2″ to fill a cupcake tin. So I set about using my cereal bowls as cutters. They were a bit bigger than necessary, but they made due.
Each round was nestled down into a cup that had been sprayed with baking spray and 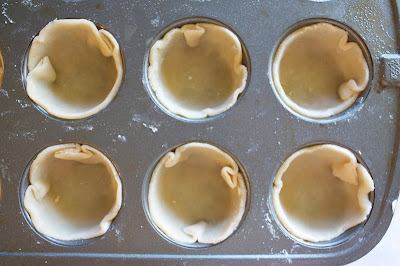 then topped with foil and pinto beans to act as pie weights before I placed them into a 400 degree oven for 5 minutes and gave them a little pre-bake. 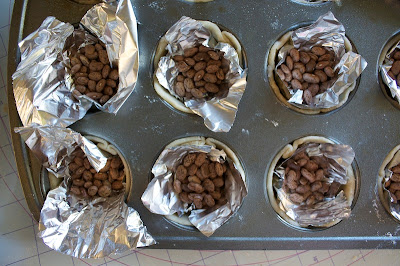 When the five minutes was up, the foil and beans were removed and the cups cooled – ready now for the final assembly.
The hour was up and it was time to remove the salted tomatoes from the fridge. With about a quarter cup of moisture being wicked away from the tomatoes, I’m glad I didn’t skip this step. 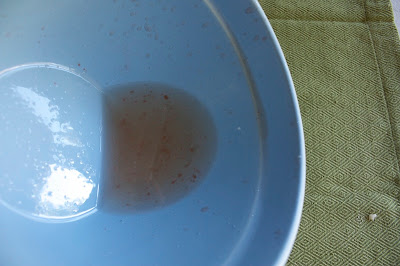 The tomatoes were rinsed of the salt and placed on layered paper towels to dry, afterwards being set aside for the final assembly.
The other ingredients required included, shredded spinach, chopped bacon and feta cheese. Mmmm, feta. 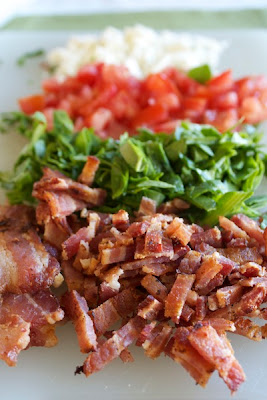 The most crucial part of any quiche itself is the egg custard. It has to be fatty and creamy, there are no two ways about it. For the custard I used 1/2 cup of whole milk and another 1/2 n’ 1/2. One whole egg and one egg yolk was added to this creamy milk mixture and whisked together until just frothy. Voi la. Easy peasy. 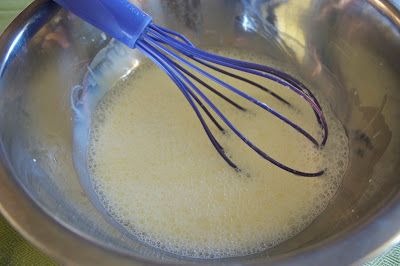 Now – final assembly!
Since I pre-baked the cups themselves, all I had to do was fill ’em and bake ’em until the egg was cooked through.
The first layer of the quiche was the feta, sprinkling it on the bottom of each cup next topping the cheese with spinach. 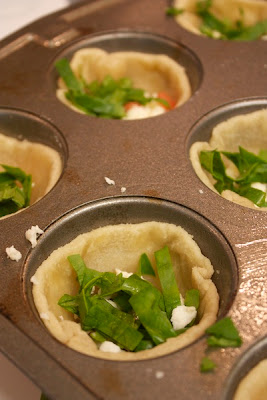 The third layer was bacon (Mmmm delicious delicious bacon) and last being the rinsed and dried tomatoes. 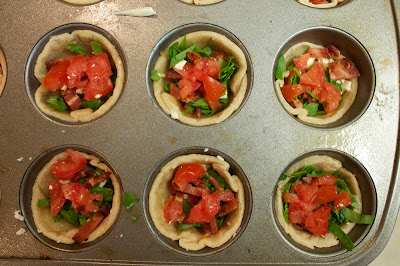 Each cup was topped with egg mixture until it just reached the top of the cups.
A little pepper was dashed on top and then the whole shebang went into the oven.
I lowered the temperature of the oven from 400 to 350, placing the cups in there for 25 minutes. 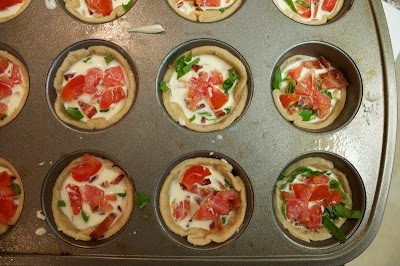 Out they came with golden crusts and perfectly creamy egg. These are a winner in my book, perfect hand held delights ready to jazz up any brunch you have.
Printer Friendly Recipe 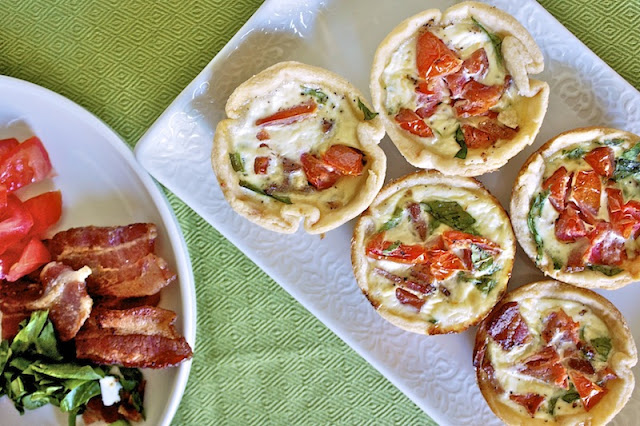