A few weeks ago, I casually trapst over to the wondrous world of oven fries, completely uncertain of what I would find, dreading the worst. Fries are meant to be completely saturated in unhealthy oil, worthy of clogging the arteries of an elephant let alone one of us measly humans. But what I discovered was magic.

My first attempt at this was a raving success in the form of Parmesan Garlic Oven Fries, but today I decided to dive into the Sweet Potato version. I whipped up three whole potatoes and Ben and I hoovered the equivalent of two potatoes already. Seriously, he just walked by with a “Dang, those are good”. He’s a man of few words, but when he says somethin’ is good – he means it. Like, really.

Below is the video and printable recipe for this quick and handy recipe, so whip ’em up and change some lives, mainly your own. 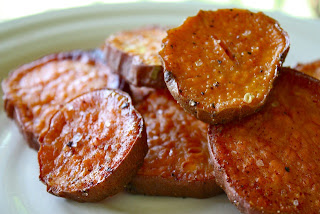