If you ever need to feel a little smug about a creamy dessert you are making, go the way of Giada and toss some creme fraiche into it. It sounds hip, exotic, romantic, and uber-culinary genius all at the same time.

Lately, Ben and I have been devouring Snoqualmie Gourmet Ice Cream’s Creme Friache gelato by the  pint-load. Doesn’t sound like much, but when I came upon it for $2 a pint at our local grocer, I snagged it up. And then went back for more. Two bucks is half the price of B&J’s, and this is local. When has anything you purchased locally ever been half the price of the mass marketed stuff? Not to mention, they are located 10 minutes from our place! Date night after-movie adventure with the hunny? Yes please!

Sorry, let the carousel of this conversation come back around and I’ll get back to my point…

Initially, I didn’t think that Ben would take to it the way he did, because he is the pinnacle of “Why would you want to ruin perfectly good ice cream by throwing anything other than vanila into it?” – kinda guy. Well, creme friache isn’t vanilla, it’s even less “something” than vanilla ice cream. No wonder he liked it’s, he’s a minimalist. Not that that is a bad thing. Because this stuff is life altering. Never would you imagine a gelato with less “stuff” in it to be so incredible, but this is.

A couple of weeks ago I won a Cuisnart 1 1/2 quart Ice Cream Maker from Ms. Laruen at Lauren’s Latest. Can I get a “Woot”?! At first, I emailed her to inquire if the “Megan P.” that was referenced on her site was yours truly, noting that if I wasn’t the correct “Megan P.”, then I hope the one that actually won would enjoy it as much as I knew I would. Low and behold, it was me that was the real “Megan P.”, so it got shipped off and it arrived last Friday. *happy dance* Ben was equally as happy because it meant that he didn’t have to buy me one himself, thought with our anniversary coming up, he was now fresh out of ideas.

Last night was the maiden voyage of the beauty, and I was feeling a little smug so I wanted to try and make my own creme fraiche ice cream with a little fluff thrown in. There were a multitude of berries in the fridge needing to be used or tossed, in they went!

This was a very simple procedure, the most difficult part being the waiting an hour “required” for all of the deliciousness to sit and meld together. Yup, I cheated only letting it sit for 30 minutes because I couldn’t take it anymore.  And really, it turned out delicious anyway.

For your grocery list include:
~ 1 ½ c. Fresh Strawberries, hulled
~ ¾ c. Whole Milk
~ ⅔ c. Sugar
~ Pinch of Salt
~ ¾ c. Heavy Cream
~ ¾ cup. Creme Fraiche
~ 2 tsp. Vanilla Extract
~ ⅓ c. Fresh Raspberries
~ ⅓ c. Fresh Blueberries
In a food processor, place your 1 1/2 cups of hulled and halved strawberries, and choppity chop until they are the size you want. Some people like big strawberry chunks, some don’t – do what feels right to you.
In a large mixing bowl, whisk together the milk, sugar and salt until the sugar dissolves. Whisk in heavy cream, creme fraiche, vanilla and strawberries. Dip a spoon in there and give it a whirl.
*pauses and waits*
See, told ya – food-gasm. It gets better. 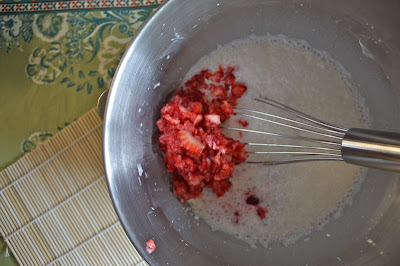 Now here comes the hard part.
Put it in the fridge for an hour or two.
30 minutes will do you just fine if you’re impatient like me. 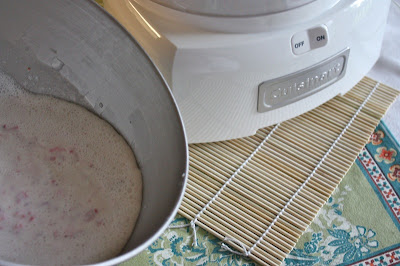 Start up your handy dandy ice cream maker, and pour the strawberry laden, creamy goo into the chilled bowl, letting it do it’s business for 15 minutes. 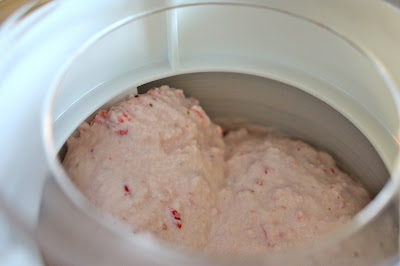 This is it after about 10 minutes. It sets up really quick. 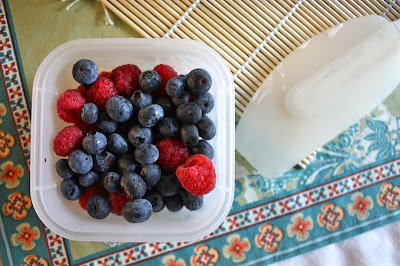 During the last 5 minutes of the process (aka, spin cycle – get it?), I poured in the 2/3 cup of extra fresh berries I had layin’ around. Aren’t they purdy? 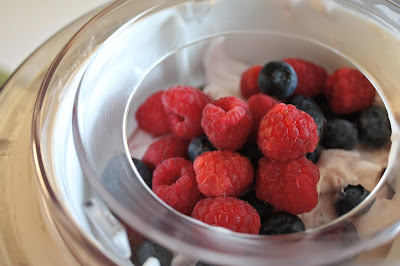 Voi la – finito!
Before I snapped the picture, I so un-gracefully took a heaping spoon out of the tin and gobbled it up right there. And it was good.
Now go ahead make this for someone you love. They will fall in love with you all over again. True story.
Printer Friendly Recipe 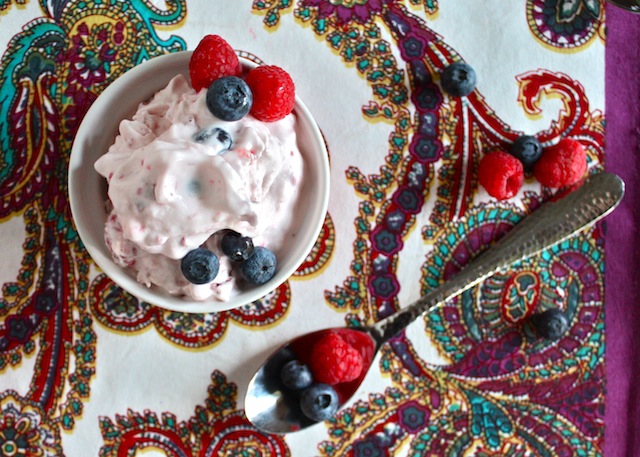