Where have these babies been all my life? Tonight I set to my kitchen with a mission – to make my first wontons. Seeing as I had just left the gym, I didn’t completely want to sabotage my 45 minutes of cardio with a grease laden ball of creamy regret. Instead I opted for the oven-fried version with wontons sprayed with a little Pam. Deliciousness in a wrapper minus the guilt. 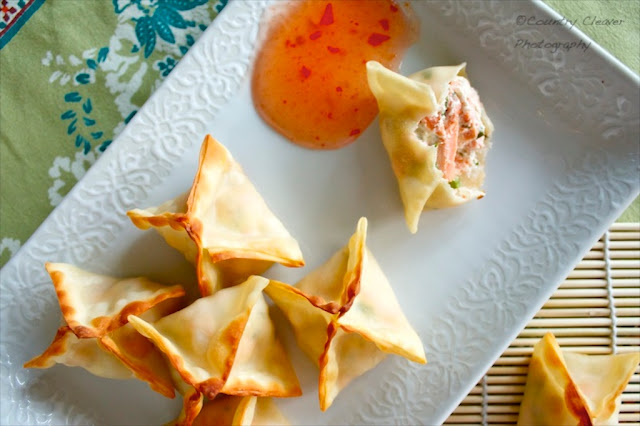 Ever since seeing the America’s Test Kitchen Bloggers’ Challenge topic this week – Salmon – I knew my sights had to be set high, and wontons filled with this signature fish was where it was at. Here in Seattle, we love our salmon. I don’t know about the rest of the nation but here we thrive on it.  Perhaps it’s rooted in our affinity for Flying Fish down at Pike’s Place Market, or spending hours out on the rolling water out-fishing your Dad (like I did) – but either way it’s a staple here and when I think of culinary culture in Sea-town, I think Salmon.
For these oven fried Salmon Wontons, I began with an 8 ounce Pacific salmon filet. I flatly refuse to use Atlantic salmon, also known around my family as Poop-Salmon. Farm raised salmon is terrible, mushy and not worth the nets their crammed in. Yes, these may be a drastic view – but cie la vie. The whole filet was placed in an oven safe dish, lined with foil and sprayed with non-stick spray. On top it was dashed with about 1/4 tsp of salt and pepper and placed in a 350 degree oven until it registered 145 degrees. About 15-20 minutes. 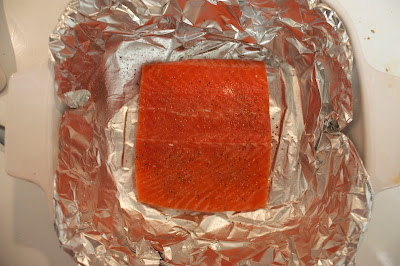 In a medium bowl, stir all of these beauties together until even incorporated.
I also prepared an egg wash to use as a glue for the wonton wrappers together and properly encase the filling. You wouldn’t want any of this stuff to get out! 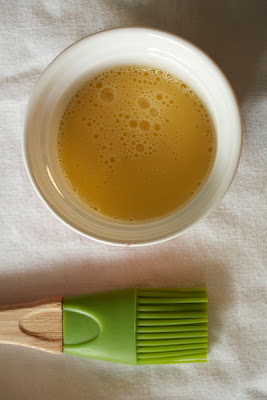 When it comes to the wonton wrappers – beware. They dry out very quickly becoming brittle in your hands in a matter of minutes. Work gingerly and with only a couple at a time. Leave a dampened paper towel over the rest or leave them in the package if necessary. 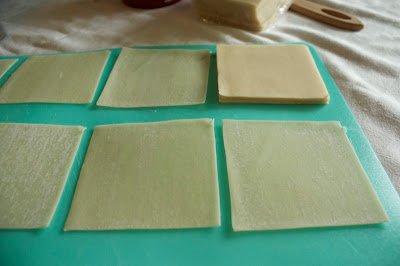 When the salmon was done, I removed the skin any extraneous bones and flaked the salmon into small pieces. 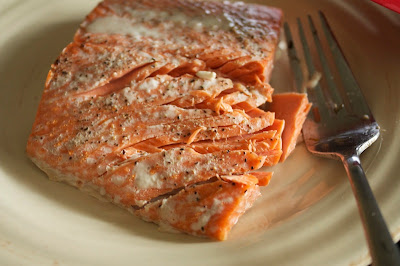 With the cream cheese mixture set aside, I folded in the flaked salmon into a light and delectible goo. If you choose not to make wontons out of these – use them as a cracker dip, it will still “wow” a crowd. 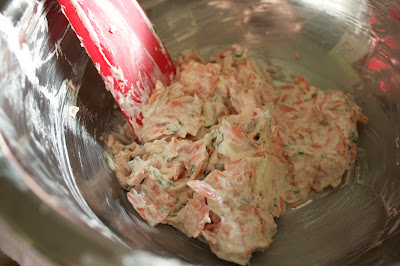 Make a line around each wonton with the egg mixture and dollop about 1 teaspoon of salmon into the middle of the wrapper. 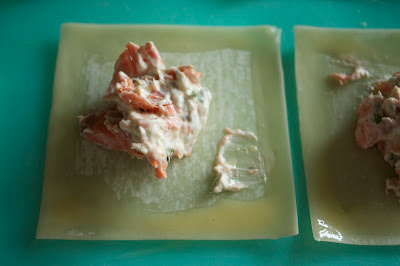 Taking each corner fold it into the middle, pinching them together to secure. With the flat sides remaining, line them up and pinch them together like a little packaged.
Let me just say, that wrapping these is quite a cathartic process. Sometimes the most repetitive things can be the most calming…or is that just me? 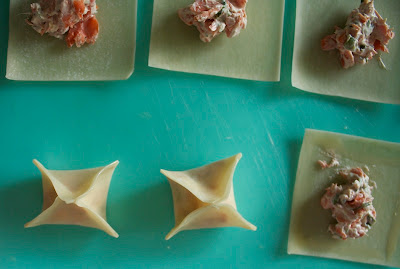 Place them immediately onto a well sprayed non-stick baking sheet, spraying each wonton with non-stick spray to ensure they don’t dry out and become brittle prematurely. 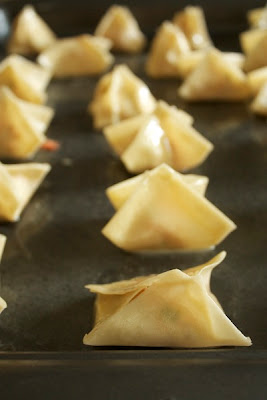 After turning your oven ratcheted up to 425 degrees, toss the whole kit and caboodle into the oven for 8-10 minutes, or until the edges are nice and brown.
Remove them immediately from the pan, onto a paper-towel lined plate to drain away any excess oil.
Serve them warm with teriyaki or sweet chili sauce. They will be an absolute hit.
On a side note – I’m looking to hire a part time dish washer. Anyone interested? 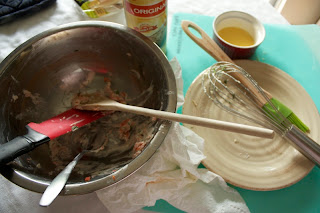 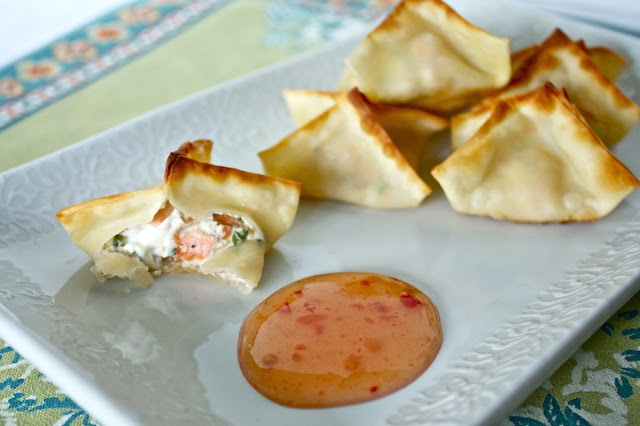 « Previous PostTomato Florentine Quiche Cups
Next Post » One for Me, One for YOU! – Giveaway!