Real. Comforting. Food.
July 7, 2011
15 Comments »
Cherries are in full swing and I’m in heaven. With a three pound box of them hanging out around the apartment, they had to get used – quick. I’m not running the risk of any of them being wasted, so what better way to maximize the wonderousness (yup, it’s a word) of these yummies then to toss them into something baked and carby?
How’s Cherry Almond Baklava sound? 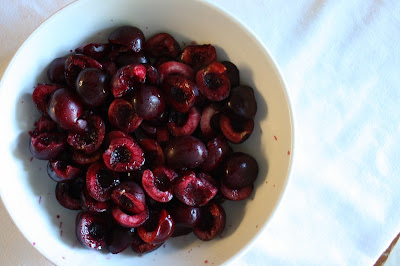 That’s exactly what I thought to. Okay, so.
To get these puppies started I halved and seeded a little over a pound of these beautiful cherries, setting them aside momentarily.
To make sure that they didn’t run and liquify all over the baklava when it was cooking, I poured them into a medium saucepan to make a concentrated jam out of them. That way they will maximize their flavor without all the ooze. This technique can be utilized when you’re doing other water-berried baking activities – like blueberry muffins.
While they are cooking away take a masher, mash them up into small pieces and let simmer for 20 minutes. Stir ’em occasionally. When half of the liquid has evaporated, stir in ¾ cup sugar. Continue to simmer another 10 minutes.

Take off heat and allow to cool. Easy peasy, huh?

Next, preheat oven to 350ºF. Butter the bottoms and sides of a 9×13-inch pan with a pastry or basting brush.
In a small bowl mix together chopped almonds and cinnamon. Set aside. 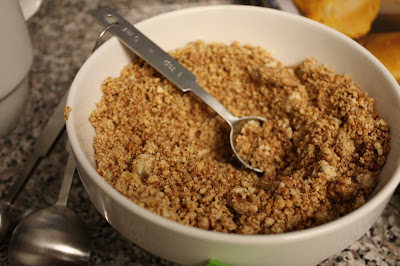 Here is where the fun begins. Phyllo is a bit challenging to work with since it’s so delicate and dries so quickly. To keep it from drying to fast, place a few watered down paper towels over it and voi la non-dried out, crackly phyllo. Place 2 layers of dough in the pan, butter thoroughly. Repeat until you have 4 sheets layered. Since I was working with a 13×9 inch pan instead of a traditional full sheet pan, I folded each sheet of phyllo in half, creating two layers out of one sheet. 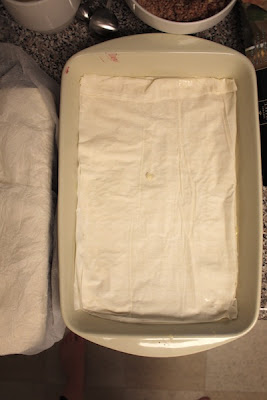 After I had 4 layers of pyllo placed at the bottom of my pan with melted butter in between, I sprinkled about 1/4 cup of the ground almonds and cinnamon over the phyllo. Another sheet was added on top, and splattered with more lovely melty butter. 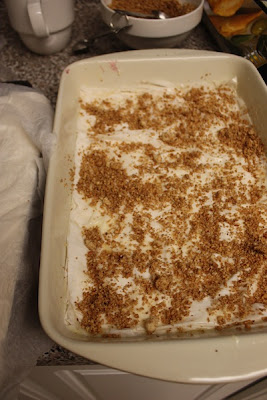 On the next layer, the phyllo was basted with more butter and a few dollops of the cooled cherry jam were added. 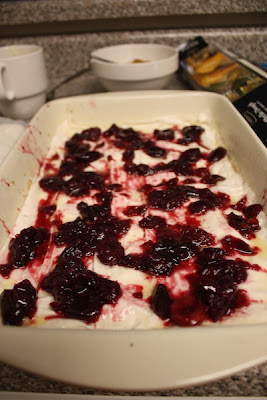 Repeat this process three times, alternating between layers of cherry and almonds until you reach the final top layer.
The top layer should consist of 4 sheets of phyllo, halved and butter added between every two layers. 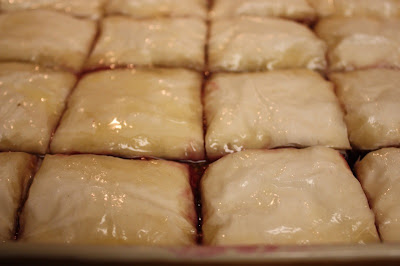 Just before it goes into your preheated oven, take a sharp knife to the pan creating bars or diamond shapes. 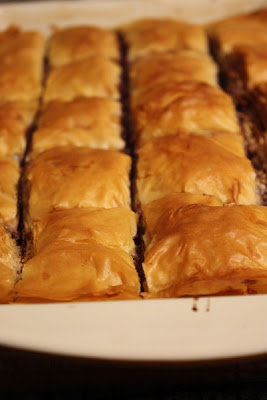 After they are done smellin’ up your kitchen, take them out and allow them to cool in the pan.
But don’t forget the sweet honey laden sauce. Everything is better with sauce!
In a small saucepan, whisk together a simple syrup of 1/2 cup of sugar and 1/2 cup of water. When this simmers for 10 minutes, add 1/4 cup hone and 1 teaspoon vanilla extract. After an additional 10 minutes of simmering, pour it over the entire pan and let it all soak in.
Revel in all of the syrupy, fruity beauty.
And I hear – they’re even better after sitting a day. Dang I can’t wait to chow one down!
Printer Friendly Recipe 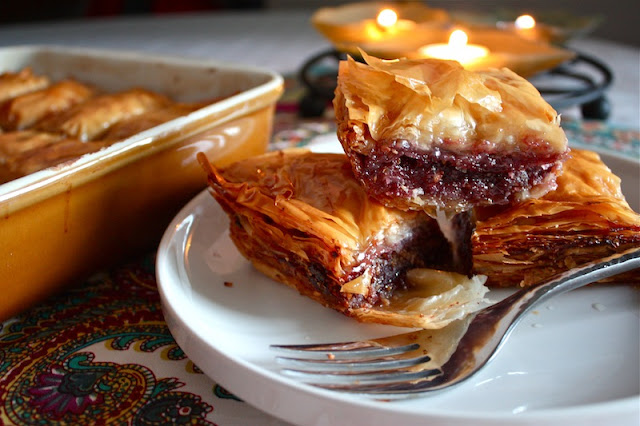