Real. Comforting. Food.
June 27, 2011
7 Comments »
I just love it when a plan comes together.
*Name that movie/character/silver-fox of a hit 70’s/80’s TV show that recently got remade into a block buster staring Liam Neeson as said Silver-Fox and fluently French speaking hunk of man-meat Bradley Cooper*.
The point is, me and yeast based doughs do not, I repeat, do not get along. I know I may come off as cool, calm and collected *scoffs*, but unless you’re a pot roast in a slow cooker – life is movin’ pretty quick and I don’t have time to wait around and watch the bread rise, as it were.
*Note: as I made this recipe, I did stand there and watch the bread rise. It was apparently quite fascinating*
If this odd behavior persists, please call a doctor or shrink.
This weekend after several attempts to make a batch risen baked goods I finally got one right.
Just one, but at least it’s a step in the right direction.
Taking a page out of The America’s Test Kitchen Complete Cookbook 2001-2010, I whipped out their Multigrain Bread, reveling in all of the carby delicious glory.
For your Grocery List include:
~ 1 1/2 cup Bob’s Red Mill 7-Grain Hot Cereal Mix
~ 2 1/2 cups Boiling Water
~ 1 pkg. Rapid Rise Yeast (I only had standard rise – and was too cheap to buy a whole jar of the rapid rise)
~ 1/4 cup Honey
~ 4 Tbsp Unsalted Butter, softened
~ 1 Tbsp. Salt
~ 3 cups All Purpose Flour
~ 1 1/2 cup Whole Wheat Flour
~ 3/4 cup Raw Sunflower or Pumpkin Seeds
~ 1/2 cup Oats
~ Vegetable Oil Spray – Pam 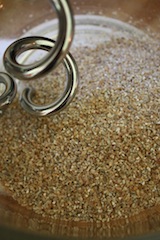 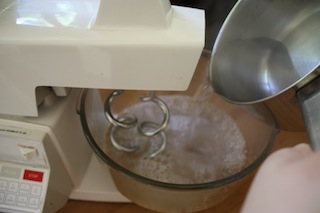 The first step was to soften and cook up the hot cereal. After pouring the boil water over it, I stired it up and let it do it’s business until it reached a manageable and yeast-friendly 100-105 degrees. 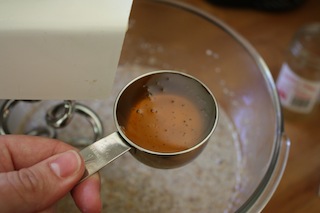 I combined the yeast, honey and butter into the hot cereal jump starting the rising process. Because of the standard rise yeast I had, I allotted more time than the stated 20 minutes. 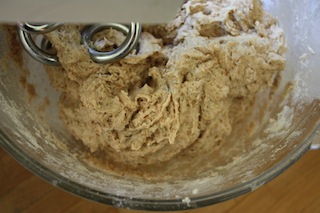 When the first rest was complete and I was sufficiently anxious to get this bad boy in the oven, I added the whisked together flours a half cup at a time, and lastly the salt. As it slowly and agonizingly kneaded it all together, pulling away from the bowl the pumpkin seeds got poured in. 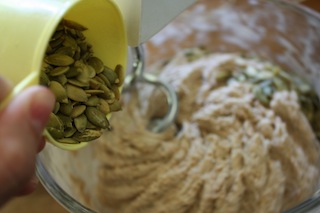 After all of the mixing was said and done, the second rise came. Ugh. Again. Impatience. 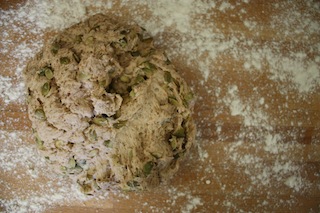 The whole blob got laid out on the floured counter top to knead and finish incorporating any loose pumpkin seeds, tightening the roll and making it look purdy. 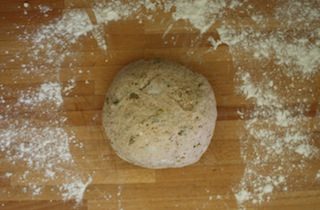 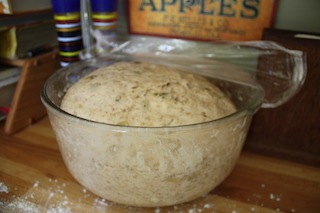 For once, my yeast actually did it’s job and rose to double it’s size. 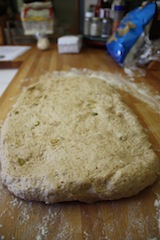 But before it’s third and final rise in the loaf plans (Again with the rising!), it was worked out again on the counter into a 12 x 9 inch sheet and divided right down the center. 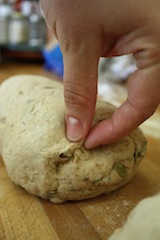 Roll the two halves up onto themselves, keeping the dough tight and pinching all of the edges closed.
Look at that gorgeousness! 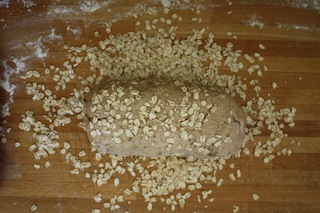 When the closing and stiching together was complete each loaf was sprayed with Pam and rolled in the oats giving it that beautiful and tantalizing and professional look. 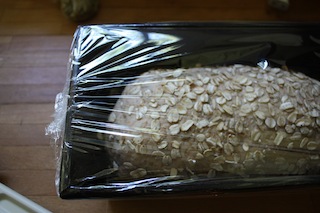 And once again my impatience took over as I watched it rise in the Pam-ed loaf pans for another 40 minutes. Oh Em Gee, people!
As they rose, I heated up the oven to 375, ready to throw them in as soon as that rise was complete. They were in the oven as soon as the pre-heat beep went off. No time to waste! 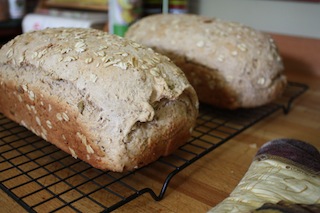 To pass the time in the oven, I cleaned out and de-Hucked my poor little car. If I wasn’t doing that, my arse would have been parked on the kitchen floor staring at the oven. Cleaning the car sounded like a much more productive use of my time. 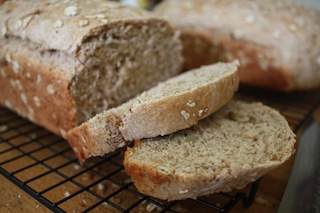 After these came out of the oven they smelled up the house and let me tell you – well worth the wait.
Make these for yourself, your hunny, your mother in law or you doctor for all I care – just make these and fall in foodlust. You won’t be sorry. Not to mention, you’ll exercise your patience bone. It’s good for the soul.
Printer Friendly Recipe

7 comments on “A Test In Patience – Bread Making”