Once upon a time….

I had this wonderful, buttery, bourbon-y bread pudding and it utterly and completely stopped the world spinning on its axis. This bread pudding combines some of my very favorite things in life, bread, baking, and bourbon. Wow, I really do sound like an alki don’t I? For a girl like me, who has maybe two glasses of wine in a week…trust me, I’m no alki – booze just does make things better.
A coworker of mine won our office Throwdown by whipping up this recipe – and it couldn’t have been more of a clear victory. After a little begging, Leslie graciously passed the recipe on to me where I told her it would be distributed to the masses (ie, you all). How could I be selfish and keep this to myself?
This recipe does require a couple of steps of preparation before the gloriousness can finally be concocted, so this is where I begin.
One step, to buy a loaf of French Bread and let it sit for a day. Or go to your local grocery and buy the already day-old stuff. Either way, just let it sit. For me the most difficult part is not tearing into it and devouring half of the loaf before you begin…no, I don’t live for carbs, why do you ask?
The second prep-step is to soak your raisins in booze. 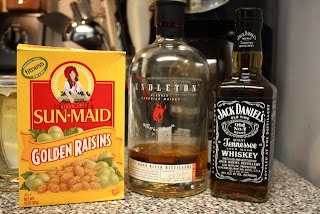 For this recipe you will need to soak 1 cup of raisins in 1/3 c. bourbon. The color of raisins doesn’t matter, so I was told, and golden was what I had layin’ around – so that’s what I used.
The booze on the other hand…is where I wanted to make sure I got this right.
From what I wiki’d and gathered during my years as a Coug, most American whiskeys are corn, barley, rye or wheat based – more commonly corn-based than anything else. All bourbons, Canadians and sour mashes are types of whisky, but not all whiskys are bourbons, or Canadian blends or sour mashes. Think “all thumbs are fingers, but not all fingers are thumbs” here.
The Pendleton above is a Canadian whiskey – by law being bottled, exported, and blended in Canada. It can contain caramels and additives, and there are no regulations on whether or not the barrel used for aging must be charred or new. The Oregon connection to Pendleton comes from the water used in the distillation process and the name of the whiskey itself to the town of Pendleton, OR. Pendleton Roundup, anyone? It’s wonderfully smooth…notice there isn’t much left in the bottle? (My Favorite Whisky)
And then of course, there’s good ole’ Jack. Oh, Jack. A tried, true, down home, American whisky staple.
Technically a straight bourbon, it is marketed as a Tennessee whisky rather than it’s actual classification.
It’s considered a straight whiskey since it does not include any additives, colors or caramels and is aged for a minimum of two years. JD itself is sent through a maple charcoal filtering process and aged in charred white oak barrels. No wonder it’s so spicy and zippy.
(Oh! And the most ironic thing about Jack Daniel’s – it’s distilled in a dry county in Tennessee. Talk about backwards!)
This was clearly the right choice for this recipe. 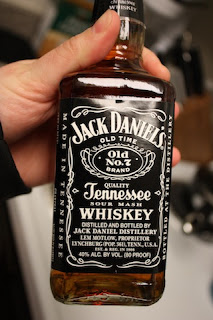 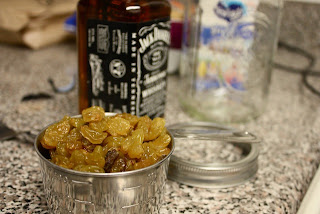 So, I measured out the proper one cup of raisins, got a cleaned out quart Mason jar and my yummy zippy whisky. 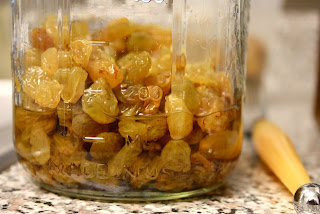 How amazing is this going to be? 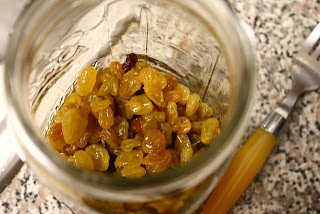 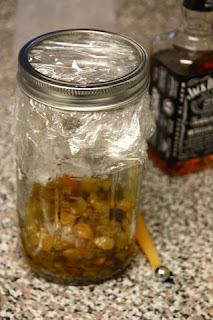 I covered him with plastic wrap – not wanting to use up a proper lid. And from time to time, swish him around to make sure all of those kids are properly soaked and yummified. Let him sit and try not to eat them along the way. Or go for it, but just make extra so you still have enough for tomorrow’s bread pudding baking.
I. Can’t. Wait. For. Tomorrow’s. Baking.
Drool!

« Previous PostGIVEAWAY – Reminder!
Next Post » Save Your Vino Winner!