Real. Comforting. Food.
January 22, 2011
2 Comments »
Venezuelan Dogs
The whole foray into these “Vennie” dogs as Beka and I call them, began our Sophomore year of college when we were still living in the dorms. Thankfully we had free cable TV, and hence The Food Network where we could geek out on shows like Paula Deen and Good Eats. After class one day she came to my room bubblier than normal to go on an on about a recipe that Paula featured for the upcoming baseball season.  Ms. Paula talked with various major league players, one of whom was from Venzuela who bragged about eating 5 of these dogs before every game – it was his tradition.
And soon, it would be ours too.
When the word ‘cabbage’ came out of her mouth along side the word ‘hot dog’ I was a little concerned, or maybe kidna grossed out. I love cabbage – like saur kraut, stir fried cabbage, or anything else, but being paired with a hot dog seemed a little out there even for me.
But as soon as I tried one I took it ALL back! It was fantastic. Since then, we’ve made them for friends, for ourselves and I’ve even subjected Ben to them, and tonight his sister Michelle had her first taste of one. Both have been pleasantly surprised and even dared to consider them Tasty – so I consider it a win!
For your shopping list, add.
~1 package your choice hotdog
~1 Bag of Ruffles Potato Chips
~Mayo
~Ketchup
~1 Sweet Onion, diced finely
~ 1/2 head of green cabbage diced finely
~Hot Dog Buns

Cook the hotdogs in whatever fashion you prefer, grilling is best, but do what cha gotta do.
Slather up your bun with some mayo and ketchup, topping with a cooked dog.

Poor a glass of your favorite white wine – if you’re into that sorta thing.

Top your dog with the diced onion and diced cabbage. 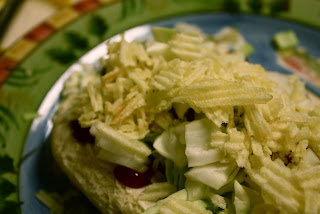 Finish that bad boy with crunched up Ruffles and you are ready to go.
Seriously, I know it sounds weird, but I am a convert and a firm believer in the magic of this dog.
And I know you will be too.

« Previous PostWanna Be A Ziti
Next Post » Blackberry Oatmeal Rounds