I’ve been told repeatedly that if you and your partner can decide on what constitutes a ‘clean room’ you can get through anything. Ben moved in two weeks ago, right after proposing on Christmass, and so we have adjusted fairly well to now going from 300 miles separating us to 3 feet.

There is one caveat to this though…The Fridge. When I get in my cooking frenzies I go into the fridge, grab what I need and shut the door. When the cooking is finished, I open the door toss what I had out and call it good.
Wednesday after arriving back at home, I was a little stressed, done with my day. After asking the hunny how his day went, he replied with a standard “fine”…paused, and then said “it would have gone better if I could have found all the stuff to make a sandwich.” Confusement set in, and I asked for a clarification. Ben exclaimed that he couldn’t find the cheese to make his sammie, when he had made a sandwich the day before it was in one place, and today it was in another. It was behind something expired that we hadn’t seen in weeks,  the mayo wasn’t in the door like normal, it was all backwards!! 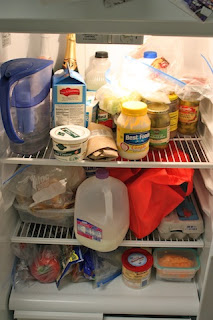 I didn’t know that my hunny would come off the rails like that over lunch meat, cheese and mayo – but this was a tragedy that had to be undone (according to him). He blurted out “What did you do, use the cheese and just throw it back into the fridge and slam the door?!” At this point, l was laughing my butt off watching him exclaim, wave his arms frantically over Colby Jack cheese! The tears were flowing and my stomach was hurting over all of laughing I was doing! (And I do promise you that he wasn’t Mad/mad at me, he was just frantic and in desperate need of a proper sammich.) 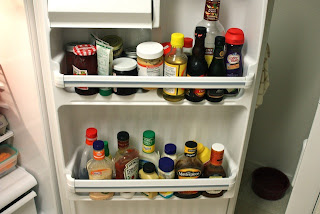 A rearrangement of the fridge was necessary. And hopefully a restoration of domestic bliss.