I’ve had these squashes in the apartment for a little while now and needed something to do with them. Until yesterday they just stared at me with their little judgey squash eyes waiting for me to make a decision on what to do with them.

So I decided to make an example of them. Or one of them, the spaghetti squash.

To begin, I opened up the squash and cleaned it out nice and proper. It has such a great squashy smell, I just love it! Weird?

After the cleaning was done, I inverted them in a large baking pan and filled it with 1/3 cup water. They were covered with plastic wrap and placed in my micro for 13 minutes on high, to cook. I turned the dish around half way to make sure they were cooked evenly.
And with all that steam, make sure you vent your plastic wrap a little bit to allow it to escape. Who’d want to break a nail scraping dried and cooked squash off a micro? I’ll pass.

In the mean time, I chopped up the onion, pepper, and all other necessary items and tossed them into a hot pan. In here is also the sausage, onion, pepper, garlic, mushrooms and the parsley. Stir frequently until the sausage is cooked through. When this is done, drain the fat into a spare can and set aside to cool and dispose of. You don’t wanna break a nail snaking that out of a drain either. Eww.

When the squash is all cooked and fork tender, don a pair of mitts to protect said mitts and scrape out all that wonderfully yellow deliciousness.

Repeat this step over again, with squash, meat, sauce, and cheese.

Toss into your oven for 30 minutes until throughly heated through. 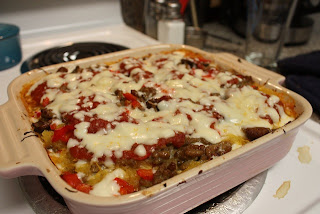 Talk about easy, and yummy. If your’e a carb watcher, there’s no pasta – so you’re set!
Now, go do the right thing – and stuff your face.