The number one thing that happens during Turkey Day?

The first thing that happens after Turkey Day?

If you’re a pup in the Northwest during Turkey Day – when there is a massive snow storm?

You run around ALOT… 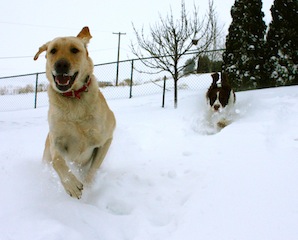 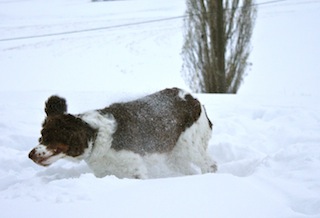 Ben and I spent the holiday at his parent’s house and attempted to stay warm with the veritable blizzard that was going on outside. We trekked with this parents and sister up to Spokane for dinner with extended family and then to visit Great Aunt Edith in a rehabilitation facility since she took a fall last month. At 94, she is the spunkiest and fiestiest woman I’ve ever met in my life. And that does include my  own great grandmother who was quite possibly the most wonderfully entertaining woman I ever knew.

Ya see, it’s tradition for the family to bring out the Bingo during Turkey Day. And for prizes – wooo wee! If you’re ever in need of a half used bottle of lotion, partially used candles or half filled bags of balloons as gifts – then you are invited to next years Turkey Day Bingo. It’s a running joke to gather all the crud, mismatched, and half used crap in your house and get rid of it here. And boy is there some good stuff!!

It was a great holiday, with wonderful people, great puppers and lots of food and things to be thankful for. And I hope yours was just as special.