Yeah, talk about and appetizing visual huh? Burned nostrils, really? But on this oh so perfect and predictably raining Friday my step-mom Denise and I buckled down and did some canning.  Cucumbers are on sale, the ones from the garden were perfect and we had nothing to lose.

Or, let me rephrase that to say that I had a cucumber or two to lose to Huck who up and STOLE them from our stash. This is one freaky animal, and he ate the entire thing. He’s a dog that likes fruits, veggies, and practically anything you throw his way – so I should have assumed a measy cucumber should have been no match for him.

With the remaining cucumbers, they were washed, scrubbed and sliced into little chips waiting their briney bath. And by the end of all that scrubbing I was completely pruny as the cucumbers, myself.

But next came all of the tedious cutting and slicing. It was a wonder to see how these things muliplied exponentially right before my very eyes. At first, they only occupied one collander, and then two oversized bowls each to the very brim. Whew!! And miraculously – no cuts!
The next step to this was boiling the jars to sterilize them, taking up half of the range, and prepping the brining agent.

And somewhere in this whole mix of things, Nisey and I needed lunch.
A cheap pizza was just the ticket. Girls’ have gotta eat, right?

When the assembly line of packing cuckes, pouring brine, whiffing of strong vinegar (hence the burning nostrils), sealing, boiling and resting was done – there were 12 quarts of pickles. 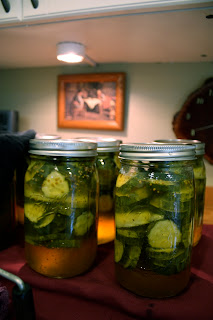 6 Quarts of Bread and Butters 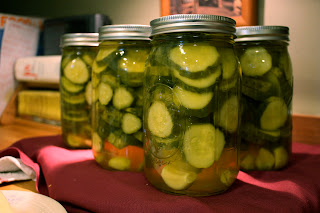 And Six Quarts of GARLIC Dills. Sorry, my saliva glands are in overdrive right now.
This was a great afternoon activity – thrashing around the kitchen with my other madre, laughing, bonding and making a mess. And on top of it, a very tasty product was had.