Real. Comforting. Food.
September 7, 2010
0 Comments »
This is the second Labor Day weekend in a row that I have been lucky enough to be amongst some truely amazing creatures – Bears. Now, both times, they were groups of ‘tamed’ hand raised and fed beasts that knew humans all too well to really get actively aggressive. The food we fed them helped prevent this also. 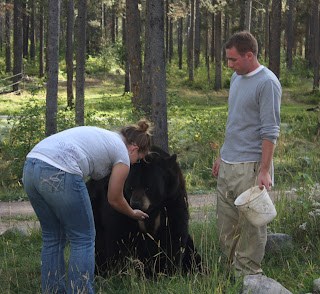 Last year a tour of a Drive Through Bear park outside of Whitefish, MT by the proprietor of the joint let us feed carrots to the black bears that had been raised at the park since they were cubs. It was one of the coolest experiences I can remember. 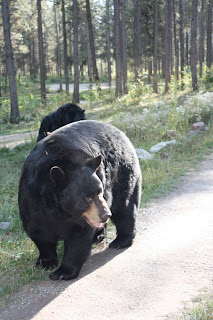 Look at the big lumbering bundles of love!
I can say that now, knowing they were pretty well tamed – but I sure as goodness wouldn’t want to come across ANY bear out in the wild. 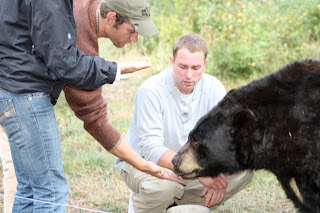 (This is Musky bear, with owner Jackson and my friends Corinne and Aaron)
This year, Ben and I had another set of encounters with bears at the Olympic Game Farm outside of Sequim Washington.
This is another drive through park, but we weren’t lucky enough to know the owner – so no private tours this time around *sad face*
Never the less, the Kodiak bears here were just as magnificent and wonderful as the other time I’d met their cousins. These boys all loved the bread we were allowed to toss their way. And they ate it up, goobering up each and every slice. 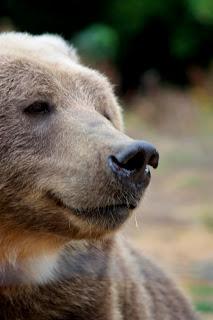 The looks on their faces was priceless. Though they were behind several layers of fences, electric ones at that – you can adore them all the same. 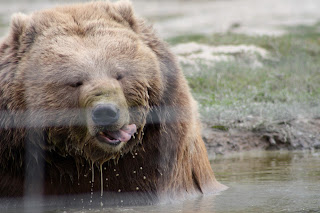 They are still bears, wild enough, unpredictable enough, predators of the deep wild – and despite all of this, all they want is to live their lives. 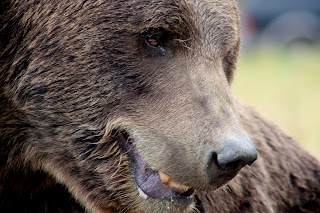 They are majestic.
Efforts of conservations and observation to the general public increases our awareness to their plight. Seeing them behind fences is not the ideal way in which to live out their years – but to understand these animals better and know that there are so many out there that need protection, can open our own eyes and increase our efforts for their safety.
As humans, we can do alot of damage to our surroundings and environment. It should be a conscious effort on all of our parts to keep the bears environment in tact. Not just for them, but all creatures. When we think about just wanting to carry on in our daily lives – we have to remember that they want nothing more than the same.
They deserve our respect, behind these fences and especially out in the wild.
Ben wonders why I love such large animals, animals capable of so much – but I think the real answer to that comes down to, I just respect them. I figure if I can give them that, I know I’ll get it back.
We can all keep learning from eachother, even across the species divide.