With the blackberries making their grand debuts, I went to town picking as many as I possible could, at the time not having an specific plans with what to do with them. Pie, jam, cobbler? There were so many dang berries over taking my kitchen they had to be done away with in some yummy fashion.

Jam it was, and here is why.

A wonderful coworker of mine is an avid cyclist. He is participating in the 2-day M.S. Bike Ride. Rallying the troops at work, many of us have wanted to find some way to contribute to his team and make a difference any way we could. Many in our office have personal M.S. stories, whether they be someone’s parent, best friend, or someone that they met just once in their life.

Since I bake, make jam, do other things to attempt to be girly and domestic – I figured I could contribute some home made jam to the garage sale that is being impromptuly thrown as a fundraiser.  All proceeds of the jam sale will be going directly to James’ team. 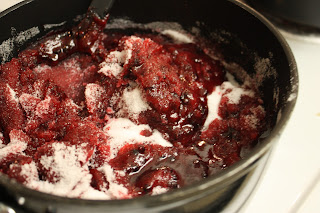 So I set this all up boiling jars, lids heating up, and berries a rolling.  Look at the mix going on up there. *Drool*. 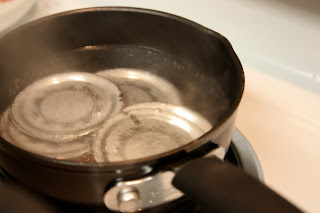 In between boiling jot jam, boiling water with lids and trying to not die of steam exhaustion, I had to whip up some dinner…. 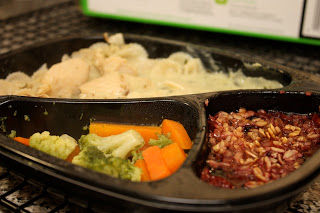 Today’s selection, being a Pesto Chicken Pasta and Veggies. Not exactly the most inspired meal for a girl who loves to cook – but when time is a factor, it was this or starving. There was no time to run to Taco Time – and my waistline thanks me. 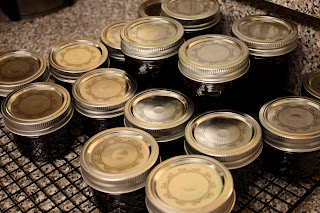 But when all was said and done – 16 jars were filled and set out to cool.
And seeing as I had extra berries and jars that I could fill, I set out to make one more batch of Blackberry jam, but this one with a twist.
Blackberry Grand Marnier jam.
Take that in for a second.
Yeah, yum.
5 – 8 ounce jars of that later, and I am so excited words escape me. These jars will be kept to myself and family, feeling that anything with booze is NOT a good idea to sell at a fundraiser for a horrible diesease.
But who knows, maybe people are into that.
Maybe at the next fundraiser.
All in all, this little adventure into canning is hopefully going to make a small difference for a team riding to combat someone else’s worst nightmare.
Thanks James for all you and your team are doing, we’re rallying right behind you.