I’d been wanting to make some jam for a while now, but have been putting it off for a little while – as per usual, too many things on my plate. But tonight I finally got around to it. And strawberry rhubarb it was!

After looking through my new favorite recipe website Tasty Kitchen, I decided I hate to take my own course on the jam recipe.

So for my cast of characters… 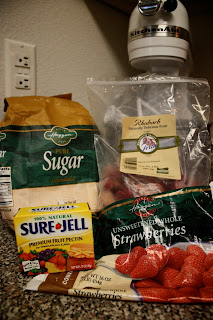 For this recipe, I ended up using 1 package of frozen unsweetened strawberries, about 1 pound of frozen natural rhubarb, 1 package of pectin and 6 cups of sugar. I forgot to take a picture of the lemon, but 2 tablespoons of fresh lemon juice was thrown in.
After I threw the lids and the jars into seperate pots to boil and sterilize, the fruit was next. 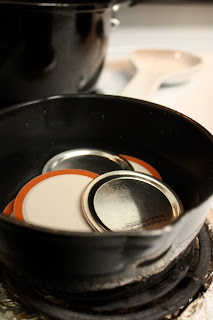 The fruits were still frozen, so I threw them into my electric skillet to unthaw and mush them up. After they were sufficiently soft and mashed into tiny pieces, the pectin was stirred in and brought to a rolling boil for about a minute. Stir in all 6 cups of sugar and you’re set!
The jars were kinda hard to handle with the tongs I had to pull them out of the hot water with, but none of them broke – so that’s a victory to me! They each got filled until about 1/4″ was left at the top, a lid was pulled out of the boiling water and sealed up with the cap.
After boiling the filled jars back in their hot water for ten minutes they were ready to set and cool. It got sticky again when I tried to taken them out, dropping a jar or two back in the boiling water, on the counter – but still none of them broke! (Victory!) 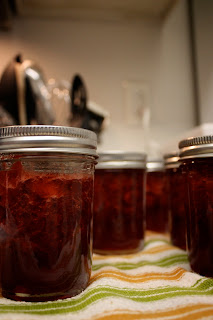 The jars are currently popping away sealing themselves up and solidifying into yummy sweet strawberry rhubarb goodness. Wow, I am really craving some toast and jam, is that weird at 8:30 at night?

« Previous PostWhere it all began…
Next Post » My Saturday Sin