I couldn’t think of a single thing to do for my dad or stepdad for Father’s Day. It’s a good thing that the topic of cupcakes keeps rearing its ugly head, cause *poof* there’s the idea. Every dad should have a cupcake on Father’s Day.

A steak is so over rated. I mean c’mon.

Since it was Dad’s day a Dad-appropriate cupcake needed to be concocted. Trophy and other cupcake shops I’ve searched have whipped up Chocolate Stout cupcakes for St. Patty’s day and such, but what dad doesn’t like beer? That’s like saying “Nobody doesn’t like Sara Lee”.

So I found a well reviewed recipe for a Chocolate Stout Cupcake on Foodnetwork.com, but heaven forbit I find an outrageously splendiferous frosting recipe to go with it. Everyonce in a while you have to change it up from basic butter cream or cream cheese frosting. So – how about Bailey’s Frosting? 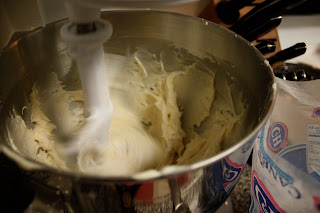 Yup – that’s what I did. I made a Bailey’s Frosting.
Look at that whipped up creamy goodness.

So when it came to whipping up those cupcakes, of course you need to start with some cocoa, sugar, and GUINNESS!!
I like my beer, but the super darks aren’t always my cup of tea. But when something like this is paired with chocolate and carbs – a whole new world opened up to me. It was a food-religious experience if there ever was one.

And the resulting product was something to behold. As they cooked up, cooled and sat their waiting for their Baileys’ Sugary clothing, I couldn’t help but slap one together and gobble it up.
Sad to say I was too side tracked with everything there is no final picture. But just imagine…