Since Ben had to work today (his birthday), I had to occupy my time and vacate the apartment on account of the maintenance guys being there to fix the broken hot water heater. So much for decorating his cake and wrapping his gifts in a timely manner…

So I found time to go get my oil changed, buy the wrapping for Ben’s gifts, go to the park (twice) and I stumbled upon….a cemetery.

All by my lonesome, with the hound dog in tow. We found a little trail leaving the park and of course – had to explore. It was crowded in by large lilac bushes, and various other large shrubberies and then I found it.  The Farr Cemetery. 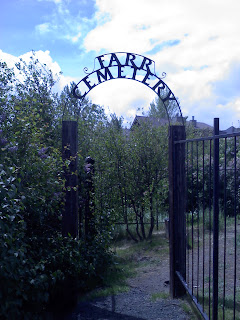 There were only about 20 graves at this site, and when I took a gander at them to find out who these people were I was completely astounded! All of the graves dated back to the 1860 – 1890’s. If you happen to know anything about Pullman, it’s probably that 1890 was when Washington State College was founded and it later became what we know as WSU today. So, 1860 predates even That! You can’t help but wonder who these people were, what kind of life they led, and feel the need to explore all of these possibilities. 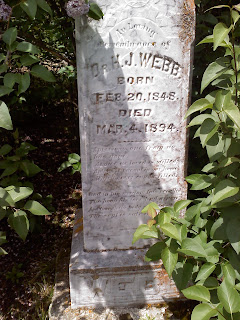 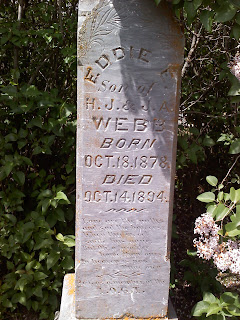 A Dr. Webb died in 1894. And his sone Eddie who died only a few short months later at the age of 16. How can you not be completely entranced by these men and the lives they could have led, or how they tragically died – especially Eddie, so young.
And when you find a grave like this one – Isaac C Newton!?! Born in Yorkshire, England and dying in Pullman in 1892. This is sure to need some investigating.  Thank goodness for my Ancestry.com membership!! 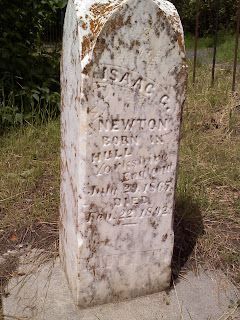 It really is amazing what you can learn when you exlore, even the most remote and random little places. I would have never guessed this was in Pullman, quietly tucked away amongst the brush and lillac trees if it weren’t for being with Huck and my wanderings.