So as apart of me becoming ‘country’ again and more “Cleaver-ish”, I wanted to start a garden. Gardening was something I was never into while I was growing up. My parents on the other hand were all avid gardeners.  But lately, I’ve been in this serious nesting mood.
On a weekend in Pullman, my boyfriend needed to make a run to the hardware store and as we meanered around I got this absolute hankering to grow something. It was the Topsy Turvy at first, but realized that was not enough to satisfy this gardening need. And he lovingly suggested, that if I were to do this, I might as well do it right.

A bag of potting soil, herb garden starter, fertilizer, hanging pots, and various seeds later – I was ready. And with a full trunk I headed home to the western Washington to start my garden. The basil, parsley, and chives took off without much work at all, just constant sunshine through my window, and the tomatoes and Red Bell Peppers sprang up shortly after. But, it’s become to crowded – in my window and in my room (which got the best light). They needed to go outside!! 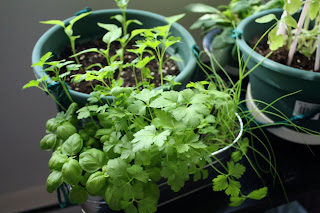 So this morning, my hunny and I took a trip to my local hardware store and got all the rest of the stuff I’d need to expand and properly grow my little apartment garden. Having a farmer for a boyfriend is really a great thing, cause he enjoys this as much as me, and he knows WAY more than me – giving him a chance to flex those farmer muscles and that wealth of knowledge he spent four years of college accumulating. 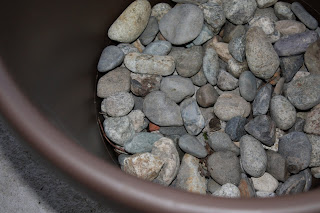 He tossed some pilfered gravel into the bottom of my larger pot, and heaved a pile of the organic soil we picked up into the pot on top.  He was really careful to make sure that this pot got a lot better drainage than my smaller hanging baskets got when they were sitting in the window.
(See how useful and knowledgable he is?!) 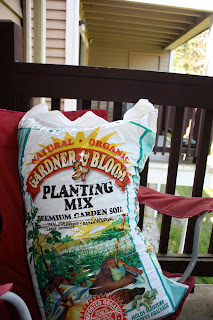 This was one of the cheapest potting soils we found at the store. The girl at the front counter gave us this tip to save almost half of what we were going to spend – and even though it’s organic, we took it!

I will go into the Organic vs. Non-Organic topic another time, I promise. This is a very great topic to discuss and my farmer has opened my eyes completely on the subject. (This is part of my conversion from West sider to Easterner) 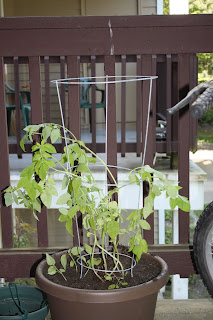 And look what came out?! He did so great! My poor little horror-movie sized
tomato plants had a bit of a shock at the transplant, but by the end of the evening had rebounded and taken to their new home quite nicely.

The basil, parsley, and chives will be replanted into bigger pots soon. My red bell peppers have taken to the fresh air quite nicely and my newly acquired cilantro plants will thrive in their new home. 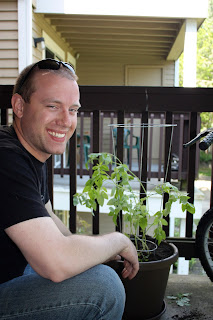 Now that I have happy plants that can spread their leaves and thrive, I can’t wait to see what happens as the growing season progresses. And of course, I will be keeping you posted.