Tonight was too much fun. It was a girl’s night and I’m blaming the bestie on this giveaway being announced far later than intended. She took me on a girls night, out for drinks, to a great comedy show and we did a little shopping. What a terrible friend she is. And guess who’s got their engagement photo outfit ready? This girl!

Don’t you just hate it when you find ‘the recipe’ you just have to try and then *BAM* it goes missing? That happened to me with this recipe. Originally I stumbled upon it in one of my Martha Everyday Food magazines, but after flipping through each one I had I couldn’t find it. Pages flipped furiously, my left eye began twitching and exasperation increased. With the angries growing and Hulk bubbling under my skin, I gave up and decided to adapt my Bourbon Bread Pudding recipe for this adventure in an attempt to replicate the inspired recipe. 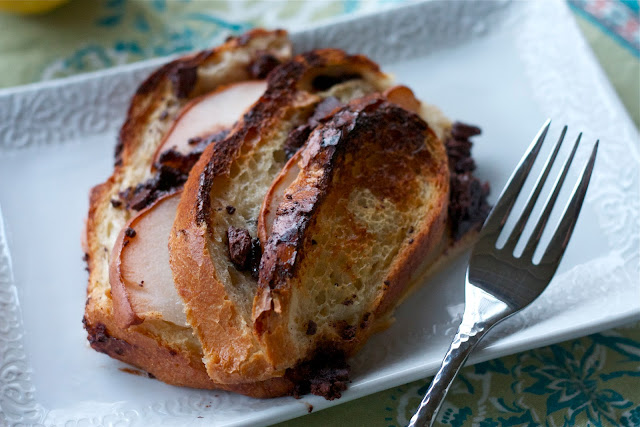 Growing up bread pudding was that food my mom inexplicably adored. Weirdo.

It wasn’t until the last year or two that it’s come full circle and I realize that I am becoming my mother.

This stuff is the ISH and I now no longer make fun of my mother for her bread pudding fascination. For other things, yes. But this, no.

With a few extra pears on hand and a good loaf of bread I set to my duties.

After preheating the oven to 350F, the bread was sliced into 1/2 inch slices. I’ve always known cubed bread, but with pears it seemed appropriate to slice it all and not to mention – gorgeous. 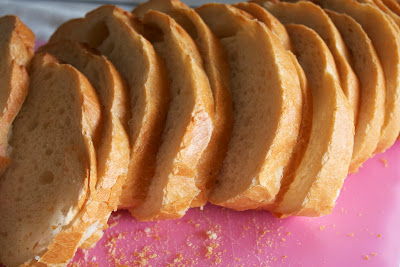 The pears were each sliced in halved, the cores removed and then thinly sliced into 1/4 inch slices. 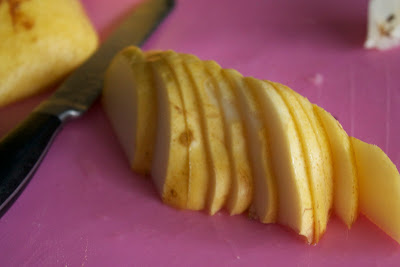 Into a 13×9 inch baking dish sprayed with Pam, each slice of bread was laid out with two slices of pear into between. Lather, rinse, repeat until the whole dish is crammed full. There is no need for daintiness here, the more cramped the better. 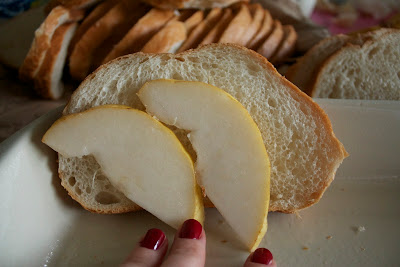 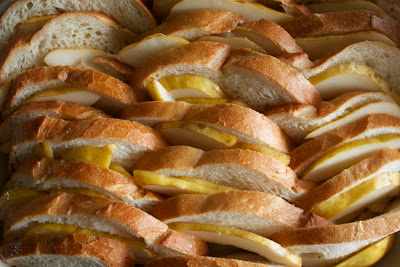 Once each bit is intertwined and nestled cozily together, the egg and milk mixture is whisked and poured over the whole kit and kaboodle.

Into a large bowl whisk together 4 cups milk, 1 tablespoon vanilla, 3 eggs, and spices. *Sidebar* For all that is holy, use something other than fat free milk. By default bread pudding is not a healthy dish, but cutting out all that delicious fat is a sacriledge. Don’t anger the bread pudding gods. They don’t like when you mess with them. Just bow and gracefully accept their will. It’s tasty will. 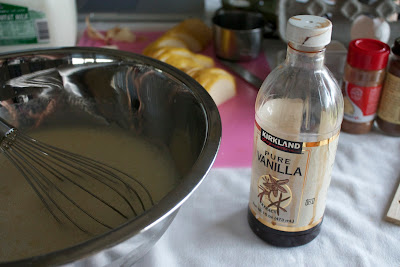 Now for the fun part – pour the whole lot over your bread and let it soak in and get all soppy.

Lastly, sprinkle over your chocolate chips and you’re ready to bake. 45 minutes and done. 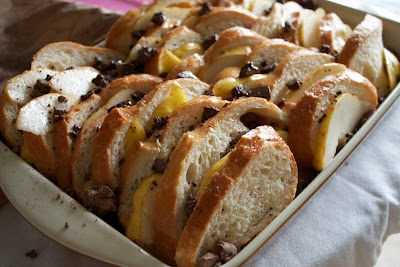 Spray 13x9 inch baking dish with Pam. In pan, alternate one slice of bread with two slices of pear. Repeat this process until all of the bread and pears are used. Overlap bread slices to ensure there are no gaps in pan.

In a large bowl, whisk together quart of milk, eggs, vanilla, cinnamon, all spice, and sugar. Pour entire mixture over the top of layered bread and pears.

Top with cup of chocolate chips. Bake for 45 minutes, or until center of pudding is set.