Real. Comforting. Food.
August 15, 2011
6 Comments »
Finally…and I do mean FINALLY the blackberries are finally getting ripe. Oh. Em. Gee.
It’s taken For-ever-rrrrrr.
During my daily strolls at lunch, while I yap at Ben about the goings on of my days thus far, I would trot across the street to investigate the Blackberry Situation. After being let down and simultaneously excited and anticipatory over the next days “are they ready yet?” adventure – a week later, after nearly giving up hope that they’d ever turn, I was rewarded with a bounty of blackberries ready for picking.
In my 25 minutes of picking, I managed to scrounge up 3 quarts of berries. Not a bad haul if I do say so myself. And to top it off, I sustained only one scratch from the prickly beasts.
Success.
Last year, the plethora of berries I picked were turned into Blackberry Grand Marnier Jam (recipe included at the bottom). This year, I decided to go a more simplistic route – and turn them into blackberry sorbet.
A couple months ago I was awarded a Cuisnart Ice Cream maker from Lauren of Lauren’s Latest. Boy howdy is this thing a beaut.
Included in the box was a handy little recipe guide to get me started off on the right foot. The recipe included for Raspberry sorbet seemed like a good place to start – a simple swap of berries and I’d be off to the races. 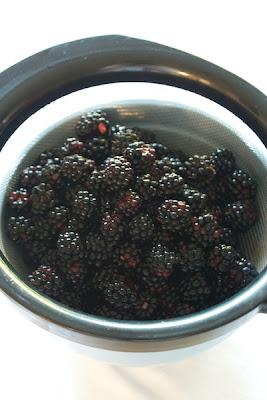 Of the 3 quarts of berries I picked, I used only 6 cups for this recipe. A pie is on the shortlist of things to make next – the guys at work have been making requests… 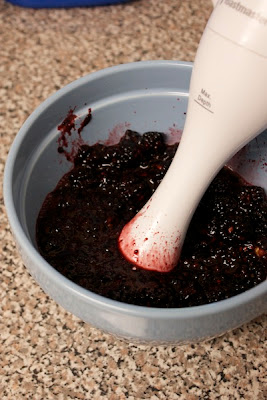 I beat them into submission with my immersion blender until they were devoid of all large berry chunks. 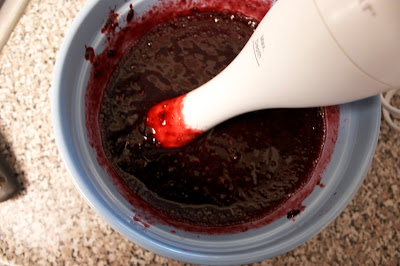 After all of that was done, I poured the whole lot through a medium sieve to remove all of the pesky seeds that would otherwise get caught up in ones teeth. Cause really, sexy’s the last thing that picking seeds out of your teeth actually is. 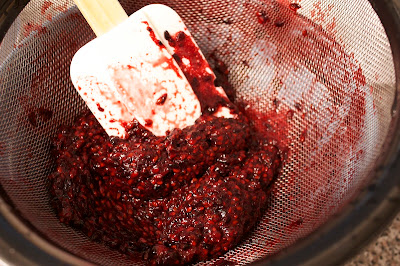 After all of the seeds were discarded, 2 cups of water and 1 1/2 cups of sugar were put into a small pot and brought to a boil. This created a simple syrup that I poured directly into the remaining blackberry goodness and pureed with the blender one more time. 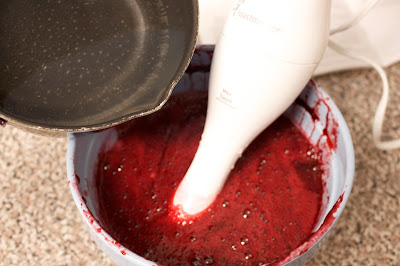 After the final blend – I covered the bowl and put the whole thing in the fridge over night. Actually, it was two nights…life got in the way and this 20 minute post became a weekend long adventure. 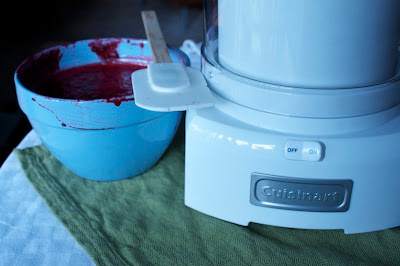 Here’s the whole set up – pre-pouring blackberry juice all over the place. My white table cloth and sage placemat are not so white and sage anymore… 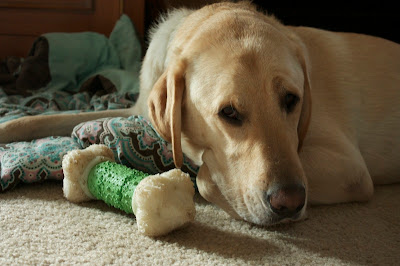 *Way to go, Mom!*
Stop judging me with your judgey little pupper eyes, Huck!
But after all of the chaos, cleaning and Spray-n-Wash-ing was done, I finally got to making the sorbet.
20 minute in the frozen ice cream maker and it was done. 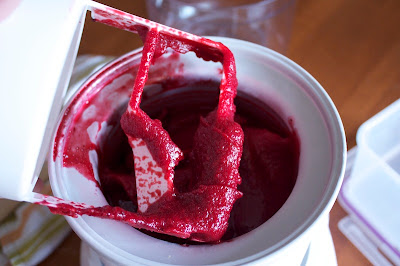 Look at that color! How does that not scream summer to you? It screams summer and stained tablecloth to me – but at least it was delicious.
So, if you have a spare couple hour, break up some berries, let them sit in a fridge and then freeze the heck out of them for a delightful summer treat.
PRINTER FRIENDLY RECIPE

« Previous PostMake It or Bake It…and an Update or Three!
Next Post » I’m Craving Pickles…and No, I’m Not Pregnant