Remember when I mentioned those silly little cravings I’d been having for pizza? Well, it continued on all weekend after having a few slices of that glorious South Western Veggie Pizza Ms. Kandace had cooked up for me during our weekly dinner.

Cravings being what they are, and leaving me with that painful and annoying insatiable desire for pizza I had to make more! Thankfully I had all the fixin’s for Ms. Ree’s pizza dough, so I got to gettin’! 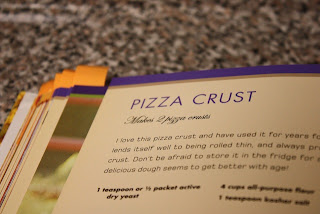 After making dumplings and learning the ways of “the yeast”, I figured pizza dough would be pretty similar. For the most part it was. I coulda left my yeast to soak a few extra minutes and I should have let the dough rise with a damp cloth over the bowl, but for the most part it went off without a hitch and it got the job done. What more do I need?
Not perfection, but making due. 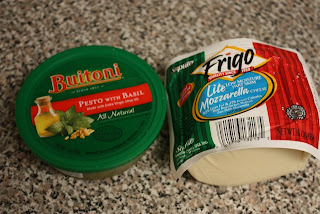 And here are two of your three toppings. Good ol’ pesto and mozzarella, is there anything like cheese?
Missing from this picture was the chicken that was cooking on the grill outside. 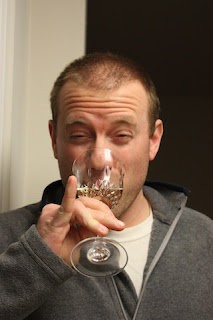 In between topping the pizza and cooking the chicken, Ben and I poured a couple glasses of wine. In typical Ben snarkiness he got all snooty with his wine, taking a sip and analyzing it and confirming, “Mmm. This is a white.”
*crickets chirping*
Yup, that’s the man I’m marrying. Isn’t he adorable, he thinks he’s funny. 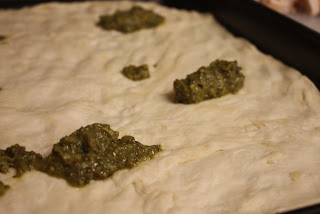 After rollin’ out the dough, dollups of pesto got tossed onto the dough and spread it all around. 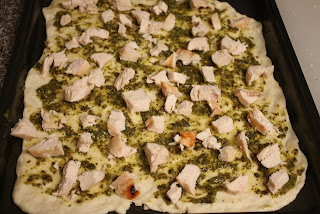 I took the grilled up chicken chopping it up into proper pizza pieces and tossing it around next.
And last but not least, there is the cheese – big ol slices of mozzarella. I’m not too proud, or tryin’ to be a hero, that cheese got dumped on there like nobody’s business.
Bake for 10 minutes at 500 degrees and, Hello beautiful! 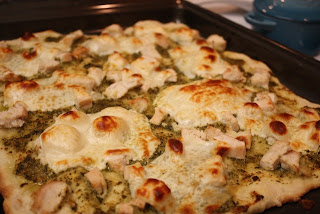 Not bad for another day of pizza cravings!
And a reminder – No, I’m not preggo!