Okay, well maybe being a lumberjack clearly puts me in the “I’m really not okay” category…

But it is something I loved and miss every day.  For three years I was apart of an amazing team at WSU, where we had fun, chopped wood and were like family.  It’s hard to believe it’s been three years.  If it weren’t for the two slipped discs, pinched cyatic and ruined muscles, I would still be there tearing it up with all those people I heart. 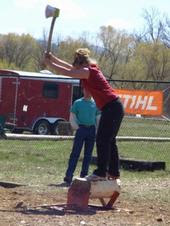 It was a complete fluke that I ended up on the team at all, but sharing a class with one or two of the guys got me interested, and after meeting the coach I was hooked. Well, he roped me in an I had no choice. He stood me on my first block, put an axe in my hand and told me I couldn’t get off the block ’til it was done. Sadly, this is no joke. 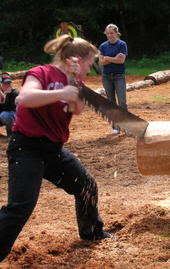 You took Groce seriously, the big booming indistinguishable voice coming from a big guy like him was something you never questioned – out of sheer fear.

But that torture paid off.

Clearly being the woosey West Sider of the team was a big disadvantage, and they fought for three years to convert me, and by the end of it – they did win.

Do you hear that Groce, Josh, Louie, Freshman, Bonnie, Kathy? YOU WON!

Along the way there were many victories and triumphs. We took first place at the West Coast Championship Conclave two years in a row, and many more shows in between. Because of these shows, friendships have been formed all over the west coast and Rockies, and continue to apart of our lives today.

It was never just about the wins. Not that those weren’t awesome – cause they were.  It was about the sport, the comraderie, running with sharp objects and true friendship.